Alf went on to tell us of the article on page 9 of the Rotary Magazine which told of the “Glittering Ceremony” honouring Nevell’s 50 years in Rotary. Nevell, in his humble way, made light of the momentous occasion. Apparently Nevell and Linley will be joining us on the 30/7/13 so we will look forward to their company.


We received a “Thank You “ from Ruth Namboya from Uganda who was our guest earlier this year.


John was inspirational in that although born as he described as “negative worrier” has achieved so much in his life, he attributes this to the power of positive encouragement and study.


He is familiar with the wonderful work of Rotary within the community and abroad. He has lived on the Sunshine Coast for 40+ years. The Sunshine Coast University is one of his greatest passions with more and more graduates employed in our community while others who have matriculated have gone on to be leaders in many different fields. His “Encouragement Foundation” has offered two scholarships to the Uni, “Read to Remember” and a Rugby Scholarship. Interestingly the Rugby scholarship was won by a female!


Their work in East Timor has produced a building a year for the last five years, the latest and sixth project being a kindergarten to accommodate eighty children. One very important  policy of the foundation is gender and racial equality and there must be equal numbers of boys and girls enrolled. I have always believed that by educating the males you improve the outcome for his family but by educating the females you educate the offspring, this is far more beneficial to the whole community! (It also empowers women and lifts them above the disgusting and demeaning chattel status which is so prevalent). John also explained that his charity had taken Australian students to East Timor as helpers and also make them understand they have “Corporate Responsibility” to those less privileged and to believe in the power of positive energy.


In finishing he implored us to encourage and reward those who have achieved what may appear to us as modest goals explaining that  positive reinforcement lifts self-esteem thus avoiding depression.


As all Rotarians will attest, we already subscribe to the culture of encouragement through our “Pride Of Workmanship Awards”


Alf thanked our guest speaker and his very helpful assistant Liberty (who incidentally is a graduate of the Sunshine Coast Uni.) 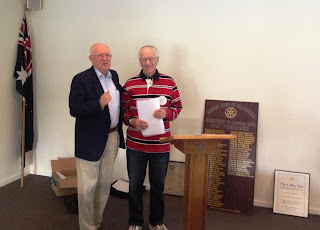 Directors reports:
John Hanley reminded all of the BBQ at the Uni. today and asked if there were any who may be available tomorrow (two are needed) to take Gerry’s and another member’s place?


Margaret gave a briefing on the “Bus Shed” for the Lighthouse Centre; it would appear that the school is going to supply a finished (at their cost) concrete slab leaving us to supply and erect the shed.


Darryl Laing invited expressions of interest from us to lunch on the “Sea Princess” later on this year, those participating would be required to arrange for a bus to ferry themselves to the ship and after a conducted tour a free luncheon on board will be provided! I think his offer will be fully subscribed, who said there wasn't such a thing as a free lunch?